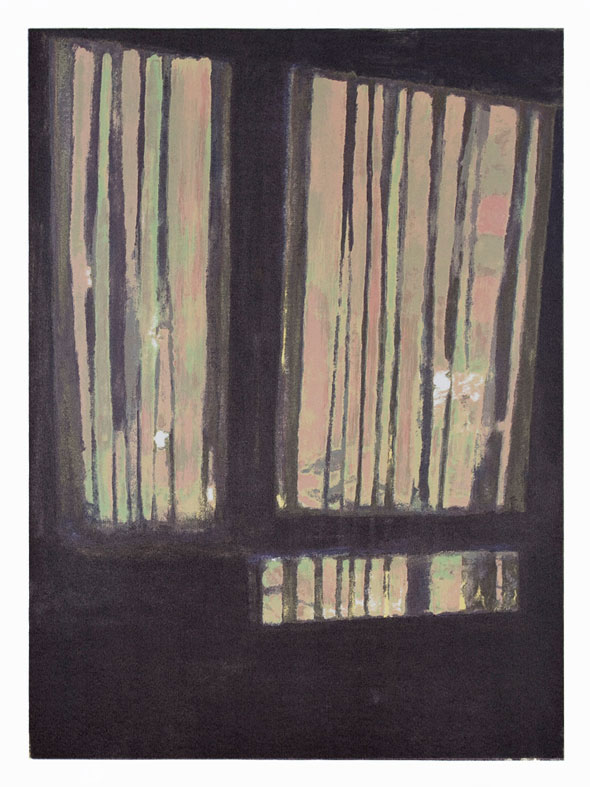 In the winter of 2009, Luc Tuymans travelled to Malmö, Sweden to install the touring exhibition Against the Day. While in Malmö, Tuymans produced a large collection of photographs documenting his day-to-day life. One of these images is a view through his hotel window where, at 4 o'clock in the afternoon, the early winter darkness was already setting in. Tuymans later used this photograph as source material for the painting 4PM, first exhibited in January 20th at the Zeno X Gallery in Antwerp, as part of the exhibition The Twenty Seventh of January Two Thousand and Eleven.
4PM presents an image from the artist's immediate surroundings framed and enlarged to create a sense of tension and alienation. Here this tension is magnified by Tuymans's unorthodox use of light and colour. From the dark interior of the hotel room, we look towards the window at an awkward downward angle. Light from the outside - from street lamps and the headlights of passing cars - filters through the curtain. There is no human presence; we see only patches of discoloured light, their sources hidden. Periodic contrasts produced by the folds of the curtain suggest the bars of a prison cell, creating a sharp separation between inside and outside.
In 2011, Tuymans reworked 4PM with the publisher Graphic Matter and Antwerp printer Roger Vandaele, producing a large-scale, twelve-colour silkscreen print. Aspiring to create something more complex than a faithful reproduction, Tuymans and Vandaele took full advantage of the technical possibilities of the silkscreen printing process. Rather than printing the background with a single colour, which would have created a flat, even surface, the oppressive darkness of the hotel room is instead carefully built up by intermingling several shades of grey. The quality of exterior light is constructed in a similar way, with a harsh, fluorescent lower layer partially obscured by a sickly, bilious green printed on top of it. This superimposition produces intense contrasts, with fluorescent streaks standing out dramatically against the dark folds of the curtain and the faded pink of the outside light. Sharp white car headlights disrupt the undulating rhythm of the curtain, itself accented with deft touches of pale yellow.
Any softness or blur in images can suggest removal: of focus, understanding, and in varying degrees, of representation. For this work, Vandaele developed highly specialised printing methods of building up painterly layers of ink - paradoxically additive rather than subtractive to achieve these effects - for the expressed purpose of emulating Tuymans's painting practice.
To start, he used toxic and difficult to work with solvent-based inks, which coalesce into a single layer that sits on top of the surface, rather than soaking into the paper (and are more durable and opaque than the now commonplace water- or acrylic-based alternatives). Vandaele's technique allowed him to apply various layers of inks to paper and create tiny 'strokes', to achieve the illusion of Tuymans's actual brushwork and uncanny use of light.
Read more

This limited edition print is published to celebrate Luc Tuymans’s curation of the exhibition 'Intrigue' in London. It has been printed in the historic RA Schools.