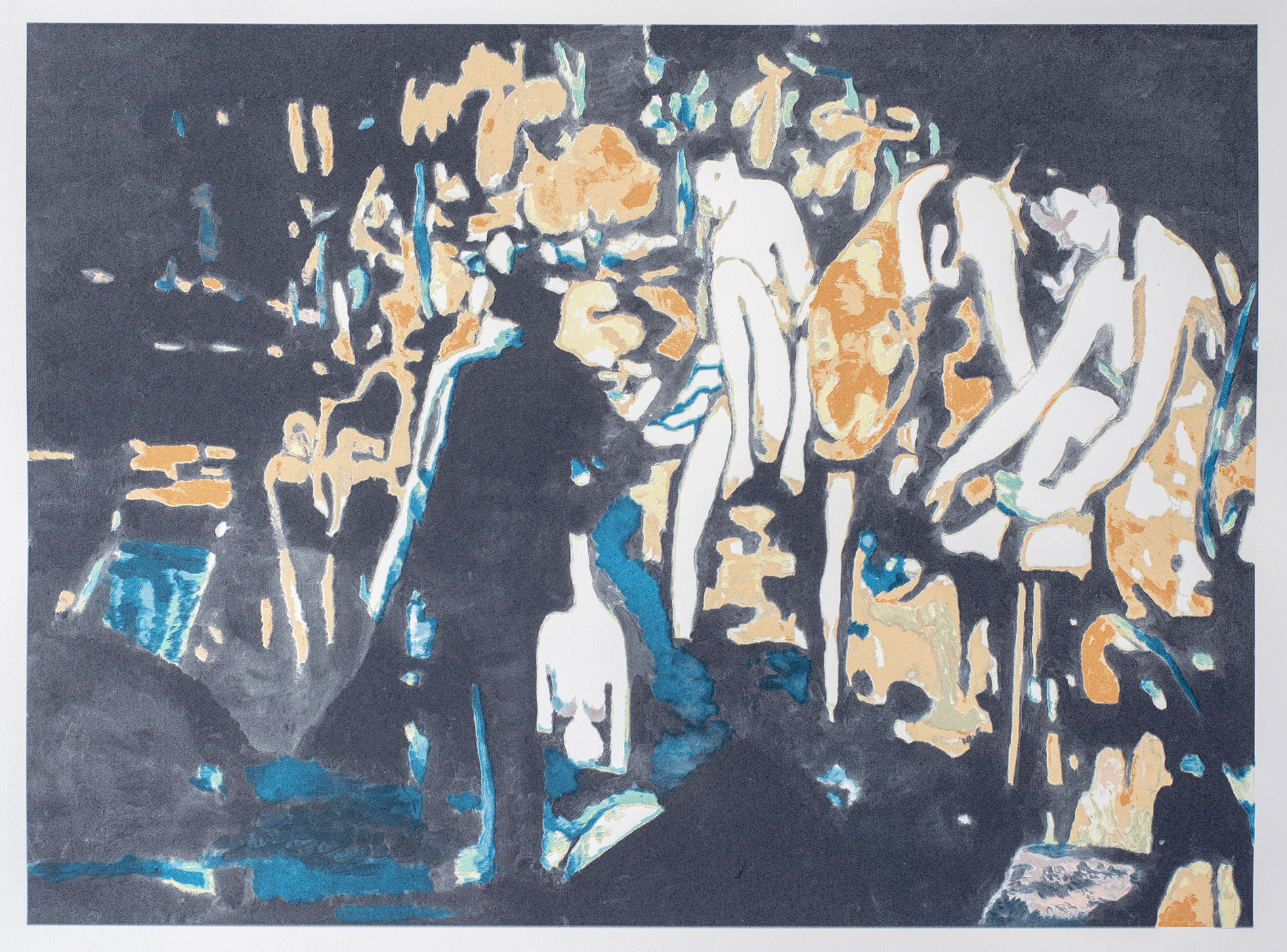 10 sets are signed and numbered in Roman numerals and are exclusively reserved for the art magazine (H)ART.

In 2011, Luc Tuymans painted a picture called Allo! (which later evolved into a series bearing the same tide), based on the 1942 Albert Lewin film The Moon and Sixpence, starring noted actors  George Sanders and  Herbert Marshalland, from the 1919 novel by William Somerset  Maugham. The book - which in turn is based on the life of Paul Gauguin - tells the story of an English banker, Charles Strickland, who gives up his family, job and possessions, and relocates first to Paris, then to Tahiti, to dedicate his life to painting and the pursuit of absolute beauty. A trail of human suffering is left in the wake of this quest, and in the end, it costs him his life. Following his death and in accordance with his final wishes, his 'masterpiece'  - finished just before leprosy robs him of his eyesight - is destroyed, in the hut where he lived and worked. Upon its release, the film received mostly negative reviews and was not a resounding success, though since its restoration, screenings, television broadcasts and DVD re-release, it has recently acquired a modest cult status.
The series Allo! emerged from Tuymans's fascination with the last few minutes of the restored version of the film, when the mostly black and white movie abruptly bursts into colour. This cinematic transformation occurs just as Strickland's doctor friend, after travelling to Tahiti to visit the painter (arriving, as it happens, too late), enters the hut awestruck, and views the enormous, brightly coloured Gauguin-esque paintings of the paradise Strickland sought and never found. The doctor immediately loses this view; at this precise moment, Strickland's widow sets the hut on fire, burning it to the ground.
Tuymans made digital screenshot images of the scene, in which the doctor enters the hut and sees Strickland's canvases. On the left of the first print we can just make out an image of Tuymans taking the photograph in the reflection on screen. Here you see a process of mirroring, reflection and reproduction: a screenprint based on a painting; based on a photograph of a screen, on which we see a film; based on a book representing the life of an artist. Moreover, an image of an artist photographing a man looking for an artist, who in fact, was looking for himself. This interplay between the visual and artistic has long been characteristic of Tuymans's work in its engagement of both reality and illusion.
In collaboration with master printer Roger Vandaele, Tuymans reworked the series of six paintings into three bright, nine-colour screenprints. Tuymans has said that his use of reds, blues and yellows relates to the tide of the series (Allo! and is not connected to the subject depicted. However, the colouration and tide are, in fact, references to a specific parrot from a tapas bar in the red-light district near his Antwerp studio - a bird that welcomes every visitor, screeching: 'Allo'. This provocative, somewhat mystifying statement leaves several interesting allusions unexposed. A parrot is masterful in imitating noises and human sounds, as imitation and the reshaping of reality is also central to the work of the artist - Tuymans and the painters Strickland and Gauguin. Additionally, a parrot's vocal imitations possess mocking qualities, which Tuymans delighted in. In an interview, he spoke of the 'ultimate joke on Modernism', the movement that from the end of the nineteenth century sought the new, the pure, the unspoiled, and the exotic.
Read more

Orchid is based on a painting by Luc Tuymans from 1998. Apparently, Frank Demaegd called it his favourite Tuymans painting.