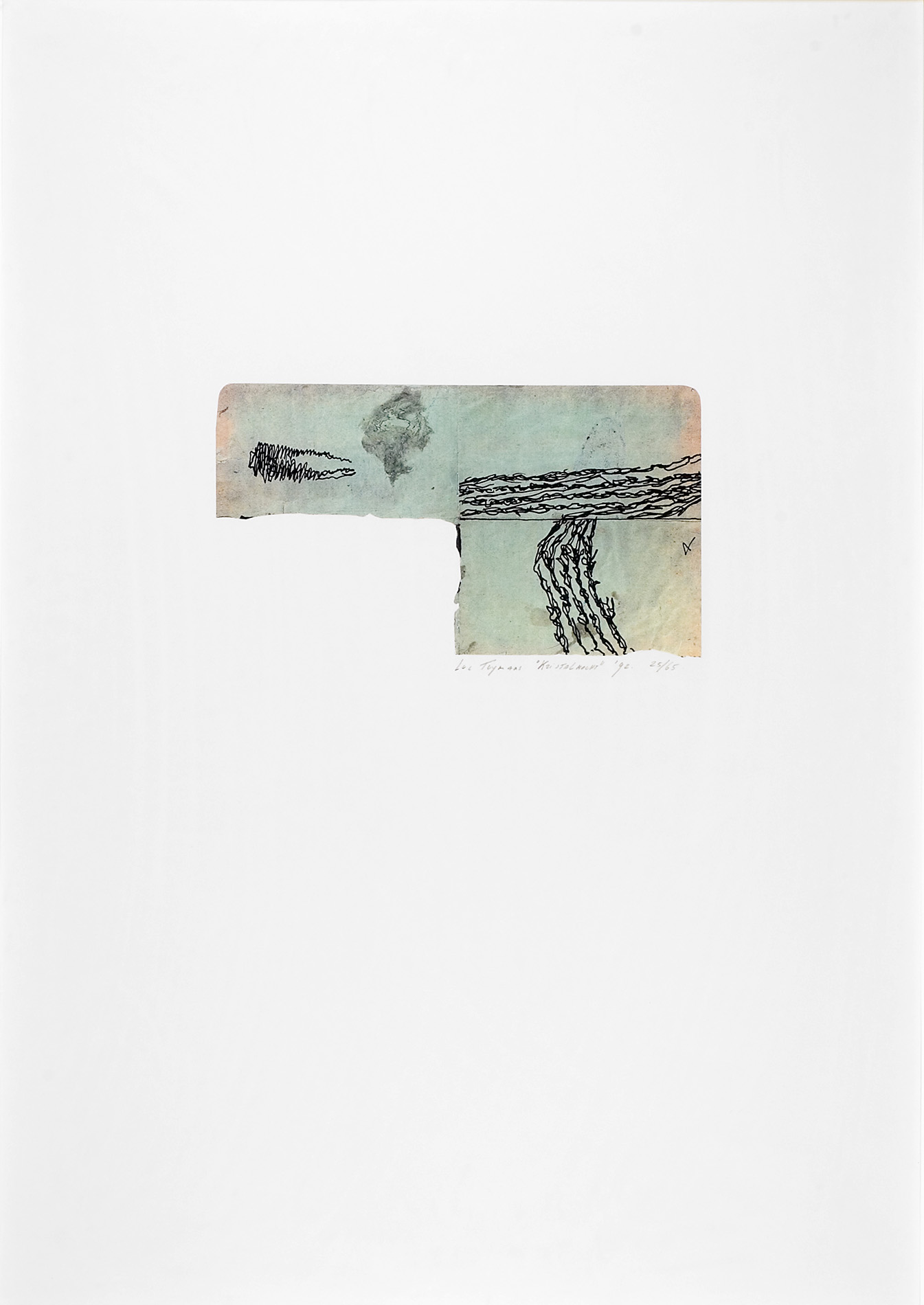 The paintings that Tuymans exhibited at documenta IX in Kassel, Germany depicted emotionally charged imagery related to World War II. Thematically consistent with these paintings, a single print, the1992 edition Kristallnacht, was created for a documenta portfolio of works by participating artists.
The Kristallnacht print is based on a 1985 collage of drawings of the same name, made by Tuymans after viewing the documentary Kristallnacht. This film documented the mass outbreak of violence against Jews in Nazi Germany that began on 9 November 1938. Named for the destruction of thousands of Jewish storefronts on that night, the violence of Kristallnacht marked a shift from the economic and political exclusion of Jews to their state-sponsored physical removal and extermination - the beginning of the Holocaust. Tuymans's drawings are based on footage of riots led by members of the Nazi Sturmabteilung together with their civilian supporters, who carried out the attacks against synagogues, Jewish burial places, homes and stores.
The anonymous, torch-carrying mob is rendered by Tuymans as an abstract collection of jittering dark lines. Quickly drawn, these lines trace the movement of the crowd from the light and smoke from their torches. According to Tuymans: 'You saw the masses moving, and the lines of the torches. If you formed an abstraction from this, you would only see these lines, like blood Rowing, or water. Graphically, I envisioned this as an agitated mass of lines, as a whirl.' 1 The drawings were made on a found piece of military-green paper and comprise three scenes. On the left is the beginning or ending point of the march, where the group forms into a lopsided ring; on the right we see two stream-like forms, each a view of the crowd from a different angle. Although there is no clear indication of scale or depth, this succession of scenes creates the impression of an emergent mass, terrifying and faceless.
The Kristallnacht collage is linked co Tuymans's 1986 painting Our New Quarters. This latter work is based on an official black and white postcard from the Theresienstadt concentration camp, found byTuymans in the sketchbook journals of Alfred Kantor. 2 The postcards were distributed to prisoners to send to their families, showing a picturesque view of a spacious and clean inner courtyard area. This state­-issued image was of course a fraud: Theresienstadt had been transformed into a 'model ghetto', a staged environment covering up the awful reality of the death camps, as part of an elaborate campaign to appease Red Cross officials. Kantor had written the words 'Our new quarters' on the postcard, an ironic reference to the empty, meaningless nature of the staged image. Our New Quarters uses a military green background similar to the green paper used in the original Kristallnacht drawing, and is likewise constructed from a series of flat, dark lines. The two works (the Our New Quarters painting and the Kristallnacht drawing) also have a thematic connection, described by Tuymans in a 1997 interview with Josef Helfenstein: ' ... in  Our New Quarters, the same feeling of the [human] masses, as in Kristallnacht, is portrayed without it being necessary to have a mass of people in the picture'.
Additionally, Tuymans believed that the use of a military green colour as the ground for these works references Nazi-sponsored terror in a visually explanatory manner, and for this reason, they were exhibited at documenta IX without text or supporting materials.