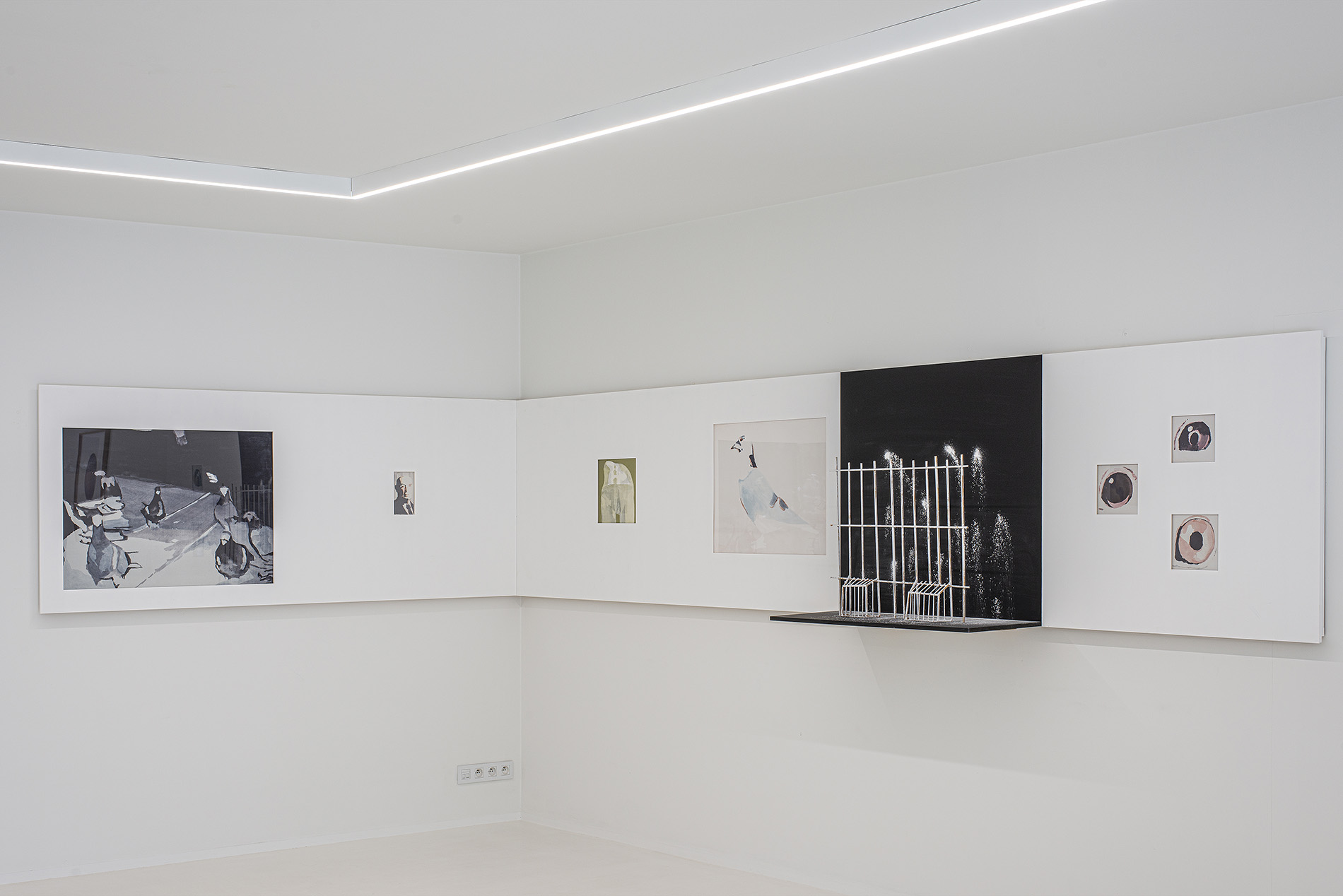 Suite of 7 colour lithographs mounted on four panels of painted acrylic sheets and wood, with birdcage.
In the autumn of 2001, White Cube Haxton Square in London exhibited a series of eight paintings by Luc Tuymans entitled The Rumour. During his youth, Tuymans had been taken on a holiday to historic Brittany, a region in northwestern France famous for its many chateaus and fortified towns that date back to the twelfth century. During one of these trips, Tuymans became fascinated with the chateaus' dovecotes, unusually large structures that housed pigeons for food, or as sport hunting quarry. Tuymans was told at the time that pigeon keeping was a privilege restricted to the nobility, and that the size of a dovecote corresponded to the size and prestige of the estate. Tuymans remains ambivalent about the birds, and has said that although doves are a symbol for peace, he also sees them as flying rats.
The subject matter for the painting series 'The Rumour' was drawn from this history, chosen to evoke the oppressive atmosphere of power and its abuse: a muddy image of pigeons on the street; birds' eyes seen in extreme close-up; a birdcage; a figure in underpants bent over; a faded portrait of an ageing aristocrat. The images of the three eyes were sourced from a pigeon breeding catalogue. (In these catalogues, macro views of eyes are shown, characterising breed quality and race­readiness.) The image source for the 'Bend Over' painting was found in a book of diagnostic views - the person depicted is standing in position for scoleosis examination. 'Within' depicts a birdcage seen from the inside.
In 2002 and 2003, Brooke Alexander invited Tuymans to create an ambitious print project. Together with the printer Maurice Sanchez and woodworker James Cooper, both from New York, Tuymans reworked the paintings of 'The Rumour' into a complex installation with seven lithographs, and a three-dimensional model of a birdcage, similar to the one used for the painting 'Within'. All eight works were designed to fit a custom-built wood and Plexiglas panel system, creating an installation over six metres long. Positioned in a corner, the installation holds the individual pieces in a fixed arrangement. At the left of this corner is a large sheet with a group of pigeons, followed by a re-creation of the aforementioned portrait.
The lithograph based on the portrait is quite small. On the right side of the corner division is 'Bend Over', followed by a pigeon in profile and the birdcage-object of 'Within'. The far edge of the installation holds the three close-up images of pigeons' eyes, staring blankly, isolated and in focus.
Antwerp-based publisher Graphic Matter produced a special edition of the project in 2012, which includes a suite of these seven colour lithographs mounted on four panels of painted Plexiglas and wood, with birdcage.
Read more