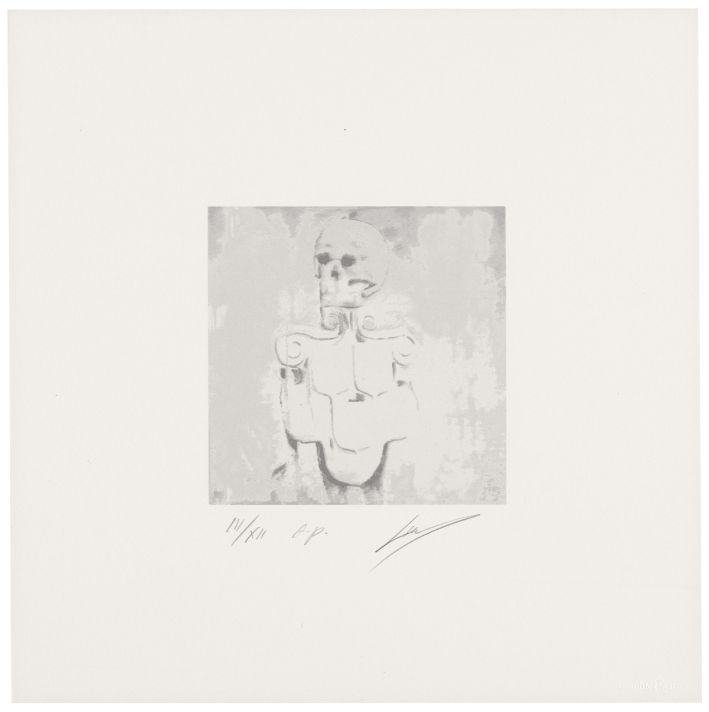 The first incarnation of Dead Skull was painted by Tuymans for documenta XI and is now in the collection of the National Gallery in Washington, D.C. The painting is based on a plaque from the façade of the Cathedral of Our Lady in Antwerp, mounted in memory of Flemish artist Quinten Massys (1466-1530). Massys was a key figure in the formation of the Antwerp school of painting in the early part of the sixteenth century and, as such, stood at the dawn of Antwerp's Golden Age in the arts. This memorial plaque, placed in the seventeenth century by collector and patron of the arts Cornelis van der Geest (1555-1638), shows a skull and coat of arms, bearing the inscription 'in his time a smith and afterwards a famous painter'. This material was probably drawn from the gravestone - Massys was buried in the cathedral over a century before. In the nineteenth century the plaque was replaced by a duplicate; the original is now held by Antwerp's Museum Aan de Stroom.
The Antwerp city council asked Tuymans to create an artwork for the public square in front of the Museum aan de Stroom. The Museum building, designed by Willem-Jan Neutelings, dominates the skyline of the city and is a visual tribute to the Cathedral of Our Lady. Because of its deep connection to the city's history, Tuymans chose Dead Skull as the starting point for the new work. On 17 May 2010 the city unveiled Tuymans's creation: a mosaic based on Dead Skull, made from granite tesserae in eleven colours and covering 1,600 square metres, resulting in a permanent public landmark.
To commemorate the event, Tuymans collaborated with master printer Roger Vandaele to produce a screenprint of Dead Skull, along with an artist book detailing the mosaic's creation and installation. The format chosen for the 40 x 40 cm print is in direct proportion to the mosaic, which is precisely one hundred times larger. Like the mosaic, the screenprint uses only eleven colours, and is executed using the exact same colour separation as the mosaic, though Vandaele's extraordinary technique captures all the chromatic subtleties present in the original painting.
The subject of Dead Skull and its variations has a poignant and vaguely ironic undertone. Skulls traditionally symbolise the transience of life - the memento mori. The ambition to defy mortality through art is as ancient as it is futile: while the monumental scale of the Dead Skull mosaic immortalises the museum, the city of Antwerp, its history and its art, it simultaneously reminds us of impermanence and the certainty of death.
Read more