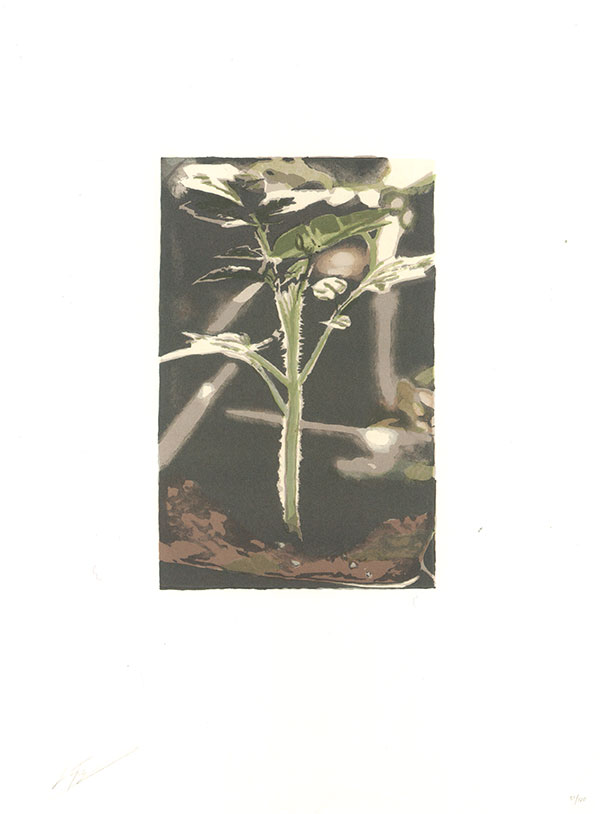 Original lithograph printed in colours from 12 stones on Arches Velin 250 g/m2 paper
Published by Edition Copenhagen, Copenhagen
Printed by Rasmus Urwald, Copenhagen
Edition of 100 signed and numbered in Arabic numerals
10 AP, 10 HC, 1 signed (archive)
GENE
Since his early development as an artist, Luc Tuymans's understanding of art historical tradition has permitted him to work fluidly along a wide range of disciplines and to operate comfortably between different genres. In addition to his knowledge of painting and printmaking, his sense of composition has been heavily influenced by the mediums of film and photography, while his experimentation with close-ups and cropping have been essential to his depictions of everyday objects. As a result, the genre of still-life painting has occupied a place in his work since the 1990s, often with a plant or flower motif as the prominent or singular subject, such as Flowers (1992), Orchid (1998), Niks (2002) and Plant from 2003.
The source material for Plant was a newspaper clipping about genetic engineering and the way in which plants are forced to adapt to their environments in order to survive - a subject that has long fascinated Tuymans. Gene is a large format lithograph that was based on the Plant painting and was printed and published the following year by Edition Copenhagen, a studio specialising in the traditional technique of stone lithography.
Gene, alongside Angel (cat. 38) and Giscard (cat. 39) is among the first printed works that Tuymans created with master printer Rasmus Urwald, using a complex printing technique with thirteen different hand-drawn lithographs printed from thirteen stones. The brightly lit  'skin' of the plant contrasts with the black and grey of the background and certain details, such as the soil in the pot, are abstracted, focusing attention on the bright green that appears in the foreground. The effect is dramatic: the backlight is accentuated so that the plant - one in a row of many young plants - seems monumentally alienated.
Read more