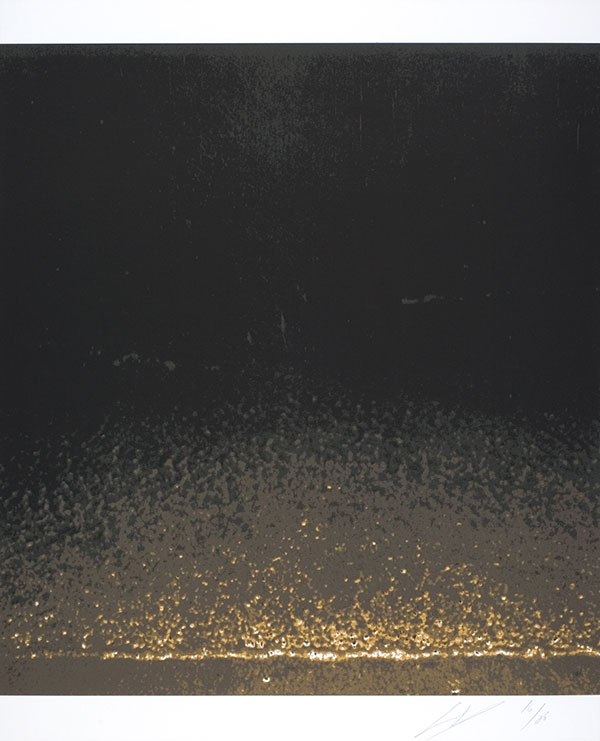 Screenprint in 5 colours on Hahnemuhle 300 g/ m2 paper
Luc Tuymans has consistently returned to the subjects of his previous works, revisiting interests and furthering his investigations through the use of different media. Oostende, a large, horizontal view of a beach and tideline at night based on Polaroids he had shot himself and painted in 2003, was made specifically for the exhibition 'Marines in confrontatie' in the PMMK in Ostend (and exhibited as part of the Beaufort Triennial of Contemporary Art exhibition in Belgium). In the same year, Tuymans's solo exhibition 'The Arena' toured Europe, including the Kunstmuseum in the Swiss town of Sankt Gallen. This led to an invitation from the Kunstverein St. Gallen - one of the oldest art museum associations and an active publisher of editions by living masters - to publish a print: he chose to revisit Oostende.
In collaboration with the master printer Roger Vandaele, Tuymans determined he would make the print from the Polaroids that preceded the painting (as opposed to the painting itself). This significantly impacted the colour of the printed work; in the painting, Tuymans had opted for greytones with light, white accents in the foreground to represent the illuminated sand with shells. Working from the Polaroids, the colouration required the print to recede into black for the background and the sideline, with a strongly contrasting golden-brown in the foreground. Though it originates from the same photographic image source, 2005's Shore is markedly different from Oostende.
In 2001, Luc Tuymans, Thomas Houseago, Takashi Murakami, Cindy Sherman, and others contributed works for a benefit auction (organised by Christie's auction house and Takashi Murakami) to raise funds for victims of the Tohoku­ Pacific Earthquake and tsunami in Japan. In consideration of the magnitude and context of the tragedy, Tuymans thought to re-revisit his earlier beach scene. Based on the screenprint, he painted the work Shore. The artist maintained the vertical format, but once again chose a palette of grey tones, as he had for Oostende - albeit in combination with the light-dark contrasts and the bright white and yellow illumination of the shells in the screenprint.
Through the use of subtly nuanced colours, the background of this image gradually spills into the golden­brown of the foreground sand, a skillfully produced effect. Again, Tuymans's process of revisitation and reproduction of subject matter has resulted in a complex abstraction in print form.

LT: "Yes, the sea, "Shore". It is an image which was made in preparation for a larger canvas which does exist. It has to do with my fascination with the border of the sea. From my hometown in Antwerp, it is a one hour and fifteen-minute drive to the shore. As a kid, your first vacations are at the shore. There are white sand beaches and grey waves. The sea is a natural force. And it's also a natural barrier, especially at night. And that, I find, has quite a magical element to it."