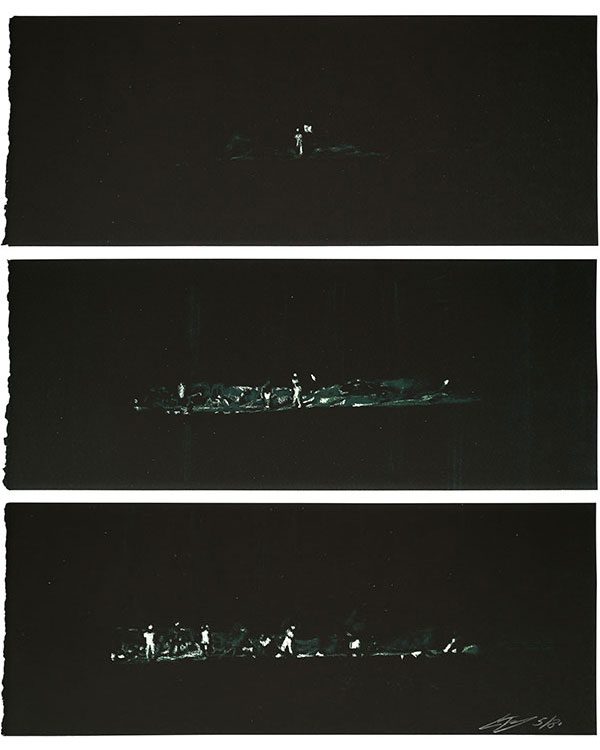 Surrender is a three-part cycle of drawings executed in white and green pencil on black paper. It reprises the opening sequence of the 1968 film Twist of Sand. A former British naval officer turned smuggler is confronted with his past when he forced to return to treacherous waters near Angola along The Skeleton Coast in order to retrieve a batch of diamonds. Memories of an incident during WWII of a search and destroy mission involving a German submarine in those waters, and the subsequent slaughter of its crew, haunt the former officer’s experience. It is best expressed in the dark images in the opening sequence of the film which show hovering lights appearing in the dark and the outline of the sailors slowly coming into view.

The drawings show the skeleton-like figures of the marines appearing on the (undefined) shore. At first it is a lone figure, holding a flag, then the group grows and is clearly seen waving in surrender. The final drawing captures the moment during which they are summarily mowed down. While some of the sailors are still waving in desperation, others are seen falling to the ground. The three stages of this execution of barely visible figures stalls a moment short of its completion. The scene of the aftermath is withheld, which enhances the impact of this act of utter decimation.
The series forms an exception in Luc Tuymans’ oeuvre in light of his usual reluctance to use black when painting. Here the grainy texture and black colour of the paper ground have been used to heighten the dramatic effect of the scene rendered faintly in rough, textured pencil strokes.

The silkscreen edition published by Graphic Matter and printed by Roger Vandaele in consultation with the artist is built up of three colours: the black feels absolute and endless, printed as it is beyond the paper’s edges. The prints convey the grain of the pencil traces and also reproduce the vertical streaking drawn by the artist in the originals. Where the paper has been allowed to shine through, the white is particularly vibrant; in other areas the overlay of black, green and white creates additional tonalities.