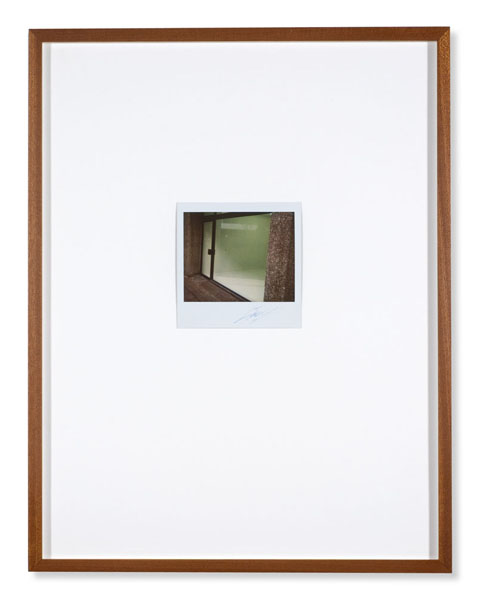 Untitled (Ende) from 2007 (based on a wall painting of the same name) is an unusual work in the scope of Luc Tuymans's printmaking practice: the series consists exclusively of Polaroid photographs and is his only series to date of unique works rather than an edition of multiples. The Polaroid instant print has long been integral to Tuymans's working process, both for research and studies, as well as a tool for the preparation of his paintings. The Ende Polaroids also work in another way: they document and depict a singular, site-specific work after it has already been realised.
The Ende series was created on the occasion of Tuymans's exhibition at the Kabinett fur aktuelle Kunst in Bremerhaven, Germany, a celebrated alternative space founded in 1967, where many respected artists - including Blinky Palermo, Sigmar Polke, Gerhard Richter and Lawrence Weiner - realised some of their earliest projects. Tuymans himself first exhibited at the very same 33 square-metre exhibition space in 1993 a selection of paintings, which marked his second institutional show in Germany. For his 2007 project at the Kabinett fur aktuelle Kunst, Tuymans considered and responded to the institution's longstanding tradition of site­ specific works, which also corresponded with his own ongoing interest in wall paintings.
Tuymans painted the entire space - floor to ceiling - in a single, light grey tone, then painted a white "image" of the light as it filtered through the iconic window frame of the Kabinett's facade onto the floor and one of the walls. The resulting room-sized wall painting was a convincing trompe l'oeil: the light-image as figure, and shadow itself as ground.
Additionally, the work serves as a homage to Blinky Palermo's wall painting Fenster, and Edward Hopper's Sun in an Empty Room.
The Polaroids, taken by Tuymans after the realisation of the wall painting, show the painted installation at different angles, from both inside and outside of the exhibition space.
These photographs range from clear and simple depictions of the work to abstract and indirect references, significantly deviating from literal documentation. The fleeting moment of light-image was reified through the painting, expanded into a fixed, indeterminate picture of time. The camera's shutter­ release required for this series of Polaroids collapses Tuymans's process of painting into instantaneous photographic artworks - frozen views of light in space.
Read more