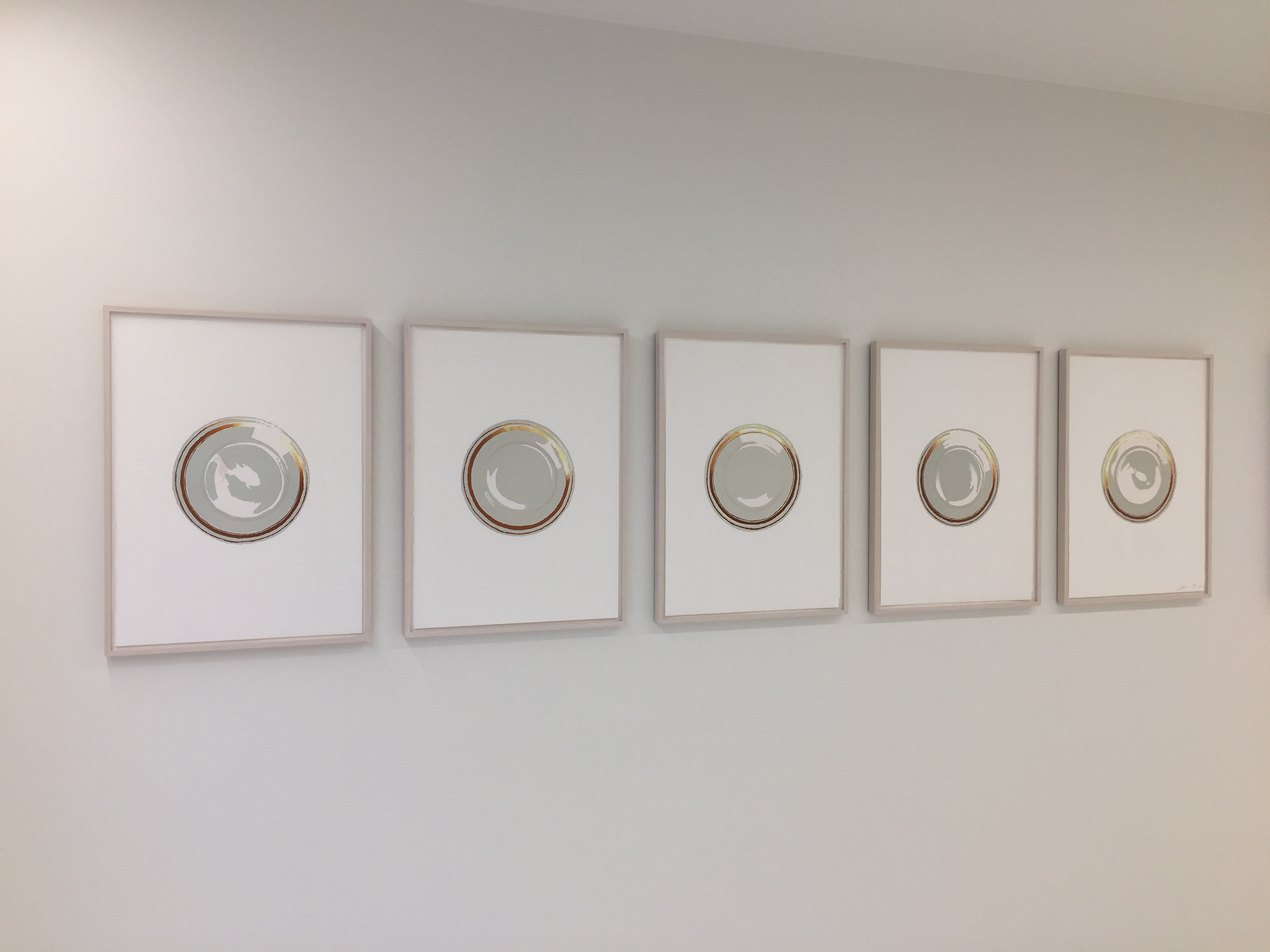 Tuymans has long held an interest in the cultural history of Central Europe, especially the region formerly referred to as the Eastern Bloc. This has often influenced his choice of subject matter and the sites of his exhibitions. In late 2010 Tuymans curated The Reality of the Lowest Rank -A Vision of Central Europe, an exhibition of artworks from Central European countries dating from World War II to the present. Plates extends Tuymans's interest in the region through the careful examination of banal, everyday objects that carry a profound symbolic charge - in this case, porcelain plates.
Fine dishware, the epitome of aristocratic and bourgeois taste, ironically continued to be cherished behind the Iron Curtain, where its manufacture was controlled by the state.
The original painting by Tuymans entitled Plates (2011) depicts a grid of six views from multiple vantage points of a carefully arranged place setting: cutlery, a wine glass, and a rimmed porcelain plate, all of which suggest a Central-European provenance. In January 2012, Tuymans produced a series of five lithographs, also titled Plates, from Polaroids of his own plates that he has used in his studio and home for years, with different light falling on each plate.
Each sheet shows an individual plate, depicted frontally and without recognisable context, differentiated as objects by small variations in their golden rims. The plates are lit from different angles, creating subtle differences in luminance and reflectivity; like the ceramics themselves, these prints are exercises in craftsmanship and precision in the production of a multiple. Drawn by hand directly onto the litho stone by Tuymans, they were printed in collaboration with master printer Rasmus Urwald, an expert in traditional lithography at Edition Copenhagen.
Tuymans reworked the Plates series of lithographs into a mural in 2012 at the Hrvatsko Drustvo Likovnih Umjetnika in Zagreb, expanding the images to a monumental scale.
Locating this work in Croatia, with its complicated history of Communist rule, the emotional power of the seemingly mundane image of the plate is further amplified due to the privatisation of the ceramic industry after the fall of the Iron Curtain and the high unemployment rate that ensued. The mural also marks an important point in Tuymans's artistic process - rather than painting providing the basis for printed works, his prints provided the source material for the mural.
Read more