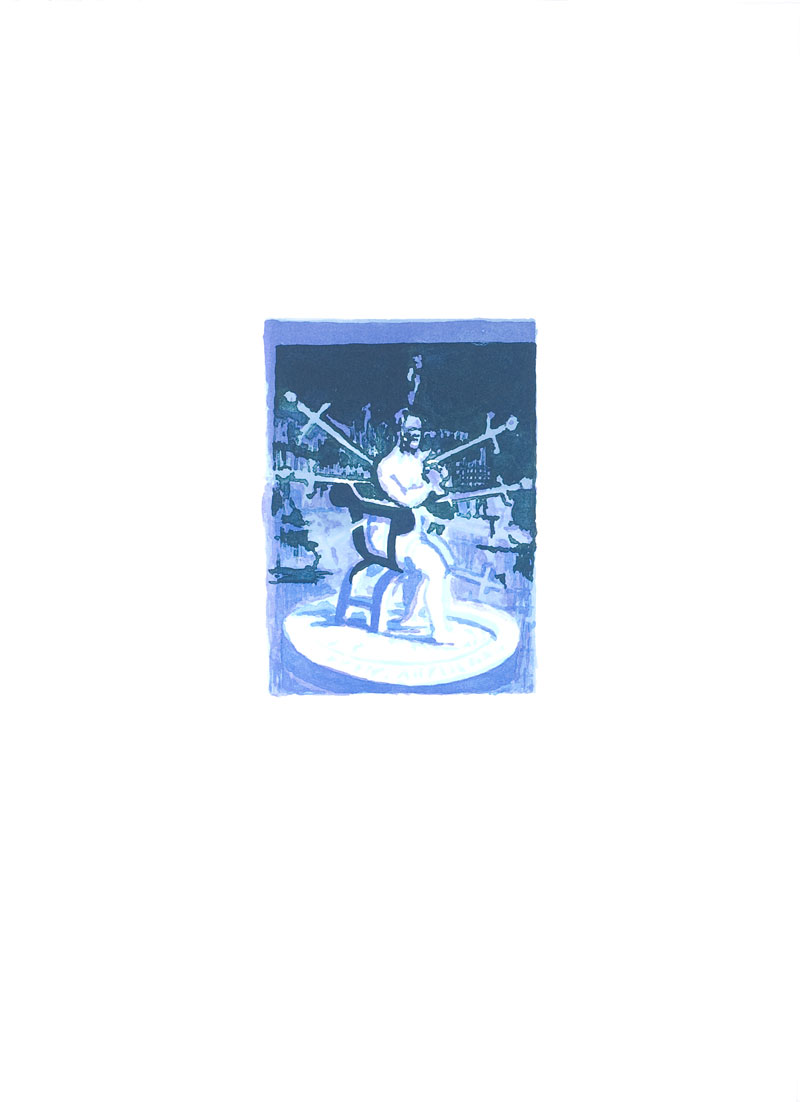 Portfolio of 7 original lithographs printed in colours from 7 stones on Arches Velin 250 g/ m2 paper
In 2007, Luc Tuymans created two projects based on his fascination with the Jesuits: Les Revenants, a series of paintings and drawings exhibited at Zeno X Gallery in Antwerp; and The Spiritual Exercises, a portfolio of seven lithographs published by Edition Copenhagen, produced in collaboration with Danish master printer Rasmus Urwald.
The Jesuits have long had a strong influence on the spiritual and social culture of the Southern Netherlands. Antwerp, where Tuymans lives and works, was the cultural centre of the Counter-Reformation in the late sixteenth century, where the Jesuit legacy has endured through the founding of many churches and schools, and the publication of numerous books and prints. Their educational initiatives, and by association, their visual practices, brought the Jesuits centuries of lasting power and influence.
Tuymans cites the publication projects of the Jesuits as a pivotal moment in the history of visual communication. Specifically, Jesuit educational practices systematically used metaphorical images to express abstract ideas - a process that corresponds closely with Tuymans's own work. The Spiritual Exercises series emerged from Tuymans's interest in this expansive history and is based on the 1673 edition of Exercitia Spiritualia, the illustrated Jesuit publication by Ignatius of Loyola,1  produced in Antwerp by Michel Cnobbaert, an important publisher of books and prints for the Jesuits in the Netherlands.
While researching source materials for the Les Revenants exhibition, Tuymans became intrigued by illustrations from the Cnobbaert publication. He then created a series of watercolours that were later used as the basis for the lithographs made at the studio of Edition Copenhagen. Though the format and composition of Tuymans's prints recall the original seventeenth-century engravings, the rounded and blurred forms borrowed from his watercolours (as opposed to the linear, articulated quality of the Cnobbaert originals),  and his use of Polaroid-infused violets and blues in his series, are entirely consistent with his painted oeuvre.
Both projects are related to the history of Jesuit influence in the Netherlands, though they differ dramatically from one another in both layout and subject matter. While the paintings of Les Revenants comment on the institutionalised power of the Jesuits, The Spiritual Exercises is an exercise in rational observation. Ignatius wrote that the Exercises 'have as their purpose the conquest of self and the regulation of one's life in such a way that no decision is made under the influence of any inordinate attachment'. The book of Spiritual Exercises is a handbook to be used by the director, not by the retreatant and its illustrations were meant for visual contemplation.
(1) Spanish nobleman Ignatius of Loyola founded the Jesuit Order in 1534. More than ten years before, he wrote Exercitia Spirituafia, a handbook on how to achieve self-knowledge and insight through discipline and daily spiritual exercises.
Read more

Portfolio of 8 etchings in aquatint on BFK Rives paper.