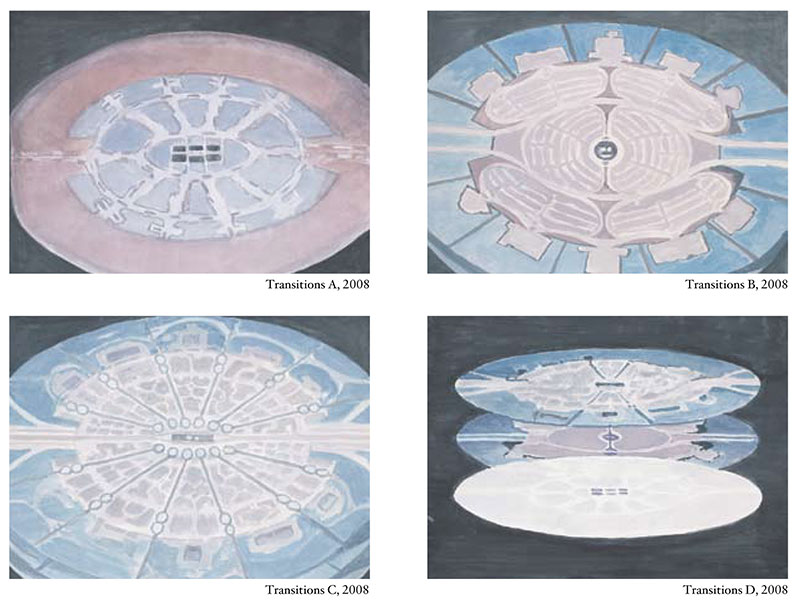 Portfolio
Suite of 3 screenprints on hard 040 transparent PVC and folder in hard transparent 040 PVC, with additional screenprint on cover
Published by Centre for Fine Arts, Brussels
Printed by Roger Vandaele, Antwerp in collaboration with Sfumato, Antwerp
Signed with felt marker on folder
Edition of 80 signed and numbered in Arabic numerals
10 AP
TRANSITIONS
In the winter of 2008, Luc Tuymans presented new work at an exhibition at David Zwirner in New York entitled Forever, the Management of Magic. Characteristically, for this artist, the exhibition was constructed thematically, this time on the subject of Walt Disney. It will come as no surprise that it was not about the renowned fairy-tale and fantasy world, but concerned the manipulation and power position of this media group. Tuymans addressed a Disney project that is entirely unknown to the broader public: EPCOT: Experimental Prototype Community Of Tomorrow. Shortly before his death in 1966, Walt Disney presented a blueprint with this name for a new city to be built in Florida; a 'utopian' community where there would be no room for deviation, where 'undesirable' behaviour, such as nuisance and criminality, would not stand a chance. The residents would be subjected to a form of paternal supervision, which prohibited the ownership of personal property and the right to vote. All residents were to be employed at the Walt Disney World Resort, of which the project EPCOT, like the Magic Kingdom nearby, was a part.
These remarkable plans were presented by Walt Disney himself in a promotional film in 1966 with the support of the state of Florida. But, when Disney died later that same year, the plans, understandably - especially at a time of major social upheaval and civil protest - were quietly filed away. EPCOT was later developed by Disney into an educationally oriented entertainment park that opened in 1982.
Tuymans became fascinated by a documentary about this utopian, but, in essence, dictatorially controlled project. Based on screenshots, in 2007-08  he worked EPCOT into a number of paintings, a large group of drawings and the portfolio Transitions. The portfolio starts from the ground plan of the proposed city, as it had been laid out by the Disney studio artists following the strict, personal instructions of Walt Disney. Essential to EPCOT was the concept of a radially constructed city in which various functions (living, shopping, leisure, traffic) were developed at different levels.
In Transitions, Tuymans inventively reworked this aspect. He made numerous drawings in gouache which were inspired by these artists' impressions. With Roger Vandaele he produced three of these as screenprints on transparent film, which made it possible to lay two or three works on top of each other. This made it possible to generate new views of Disney's utopian city, while at the same time referring to the (literally and figuratively) oppressive layering of the project. The colouring, the ink and the method of printing correspond beautifully with both Tuymans's gouaches and the style and technique of the Disney animation artists. Transitions was published by BOZAR art centre in Brussels and, in 2008, was donated to the centre by Luc Tuymans to mark the 80th anniversary of this institution, where he had curated The Forbidden Empire. Visions of the world by Flemish and Chinese Masters a year earlier.
Read more