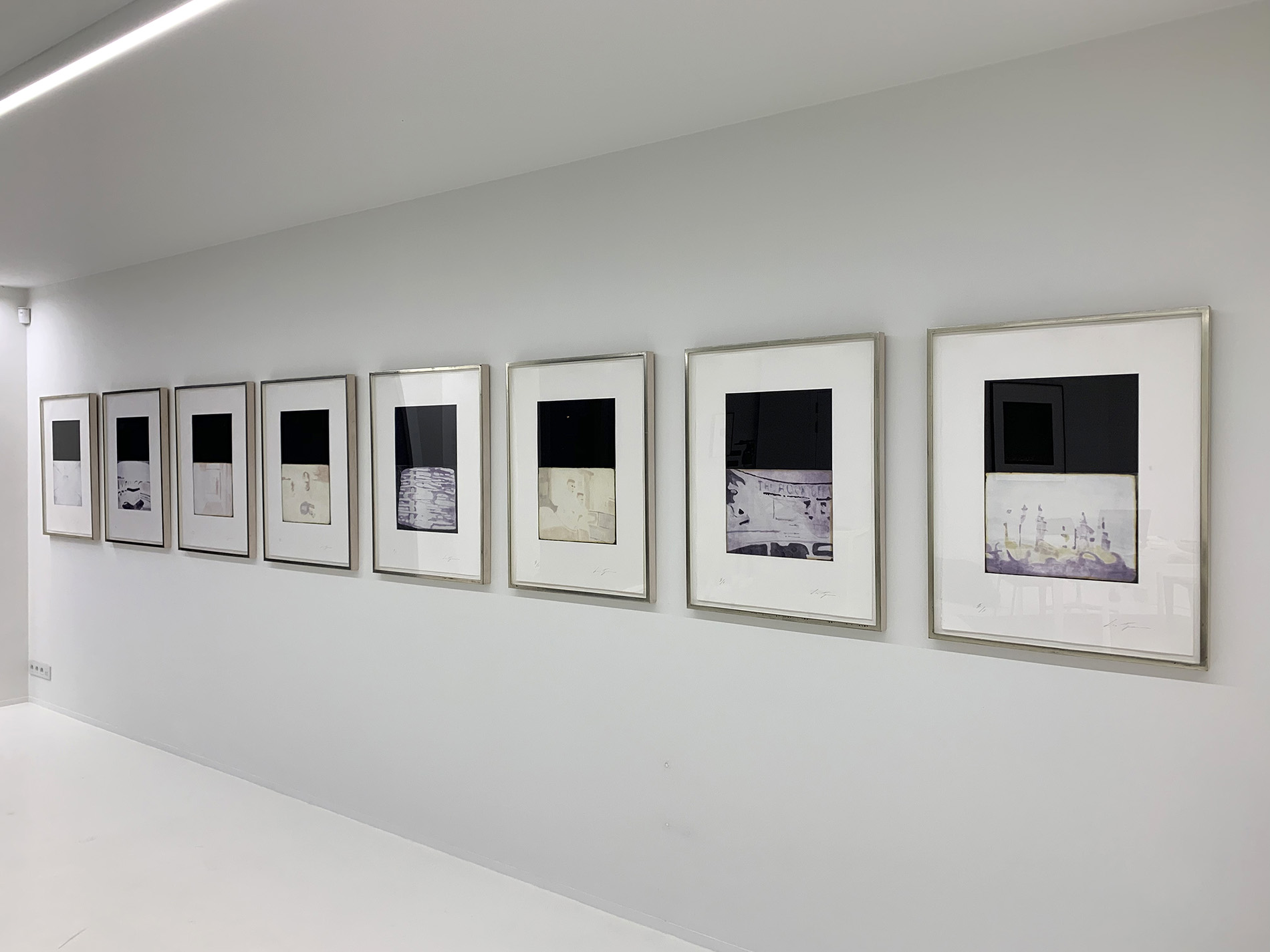 Each portfolio contains a single sheet signed centre in pencil, in print 'The Temple'

8 aquatint etchings on BFK Rives paper
A collaboration with Peter Blum Editions in New York, The Temple was printed in 1996 by the renowned Zurich-based master printer Peter Kneubühler (1944-1999), in his copper­ plate printing atelier. It is widely considered (alongside Eric Fischl's Year of the Drowned Dog (1983) and James Turell's First Light (1989-90) to be one of Kneubühler's masterworks.

The Temple references a television documentary about The Church of Jesus Christ of Latter-Day Saints, otherwise known as the American Mormon movement. The programme showed rare footage of the Salt Lake Temple, the movement's main headquarters in Salt Lake City, Utah, and their Granite Mountain Records Vault, which houses the largest genealogical database in the world. The Granite Mountain facilities feature a vast, dry, climate-controlled facility used for long-term record storage, as well as administrative offices, shipping and receiving docks, a processing facility and a restoration laboratory for microfilm. Records archived in this location include over 2.4 million rolls of microfilm containing detailed genealogical and family histories.

The empty and obliquely faded images in The Temple evoke blurry sequences of microfilm frames, captured via Tuymans's memory. The series begins with an image of the entrance to the Vault; next we see figures at a front desk; and further on worshippers being baptised. In another scene we see missionaries carrying out their teaching missions, and the final image reveals an interior view of the Museum of the Book of Mormon. While these image fragments may appear to be common or mundane, the seemingly banal representation suggests a totalitarian force at work behind this hierarchical sect, and a disturbing narrative emerges - not from the explicit representation of facts, but rather the suggestion of what lies outside of the selected viewpoint.

Tuymans began by making dozens of Polaroids of images from the television programme. These snapshots served as reference material for a series of watercolours, which Tuymans again re-photographed as Polaroids. With each step in the process, the generational degradation of the images negates more detail, as they fade into an abstract and nearly monochromatic wash. This technique renders stages of emptying and emptiness; figures are indeed present, though they are reduced to anonymous and motionless forms, nearly drained of colour.

With this series of prints, we find Tuymans and Kneubühler skilfully maximising the formal possibilities of traditional aquatint printing. In contrast to the linear hatching used in conventional etching, aquatint creates smooth tonal transitions. This allowed Kneubühler to preserve the quality of both the original microfilm and each stage of re-presentation of the images in Polaroids and watercolours. The upper half of the image has been left black, suggesting a theatre curtain or the black transition frames of a microfilm reader, while the framing and corners of the images in the lower half of the prints have been subtly rounded off, a vignetting that recalls the image source: an ordinary cathode ray television tube.
Tuymans at one time considered using the photographs for a full series of paintings; from these Polaroids a mere two works emerged: Altar (2002) and Tunnel (2004). Altar was reworked yet again into a digital print (cat. 27) for documenta IX.

The dense black in the upper part of the print was made with a fine textured aquatint applied to the plate and etched overall. The soft lines in the image below suggest that the artist used the method of sugar aquatint by painting directly onto the plate with a sugar and Indian ink mixture, producing a line that then prints positively. Each colour was applied separately on individual plates, using as many as six plates in one print.